Showing posts from July, 2016
Show all

A proof of Unified Party USA

July 31, 2016
A long list of CFR, Bush and Reagan cronies are supporting Hillary Clinton, a student of the  communist professor Saul Alinsky.  Welcome to Unified Party USA,  predicted in 2013 by George Sorbane's book the "Endless Beginning". Is this a prelude to a New World Order, or the beginning of bloody New World Disorder. Stand by.
Post a Comment
Read more

Lies over illusions over hallucinations and then more lies.

BIBI1581 ‏@bibi1581 3h hours ago Hillary lied about US emails, now about DNC emails,about Benghazi,on&on. This woman has brain damage.  If elected she would let her woman abuser husband take care of the economy. But Bill is already suffering from dementia, a first step toward Alzheimers disease and Hillary by all accounts has a brain damage from recent fall. And she has the audacity on top of that to attack Trump who at age of 70 is running a 10 billion dollar world wide business empire, and managing to produce profit every year? Why? Because he threatened to vet members of a religion who have a stellar record of attacking  and killing Westerners in general, Americans in particular. Three thousands died in the 911 carnage, 5000 soldiers died in Iraq and Afghanistan, 250,000 vets came back with brain damage from ID's explosions in the wars, and numerous lone wolf attacks have claimed lives in the USA and abroad. Are Hillary and Obama pulling the same trick as the drug impaired
Post a Comment
Read more

Does it matter to you?

BIBI1581 ‏@bibi1581 2h2 hours ago In 8 years did Obama, Hillary&Co advise US police to treat impaired people with care before shooting? Not a word . Many people, mostly black were shot to death, and many police officers assassinated along the way. A completely senseless slaughter and loss of precious life that could have been prevented. Did we hear Hillary mention Michael Brown, shot to death over $3 of cheap cigars? Was he impaired at the time of the fight? Yes he was high on pot, and of course she could care less, as she was defending her criminal abandonment of four honorable Americans left in the clutches of AlQaida to die without any help. Does not matter, she said. Does it matter to Americans to have a President who is sitting in her $5000 easy chair paid by Saudi money, not giving a damn about how her citizens are treated? Just a thought on a beautiful Sunday morning.
Post a Comment
Read more

A message of peace

July 30, 2016
Walk into the light of the Lord and listen to the sound of Christis Vincit, a message of peace and hope. http://youtu.be/7cFgpvylbRU
Post a Comment
Read more

The end of bar waiters? A beer robot is seen inside a glass case in a bar in Qingdao, east China's Shandong Province, July 30, 2016. New technology integrated into this year's Qingdao International Beer Festival, which is to open on August 13, as a beer robot serving as both a bottle opener and a waiter of the bar. (Xinhua/Zhang Xudong)
Post a Comment
Read more 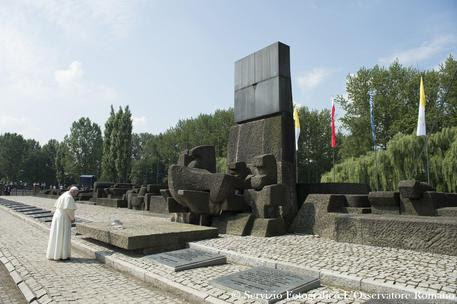 FOTO Redazione ANSA ROME 29 July 2016 20:45 NEWS (ANSA) - Rome, July 29 - Pope Francis visited the former concentration camp of Auschwitz near Krakow on Friday as part of his programme for World Youth Day (WYD) in Poland. The pope entered the camp on foot and in silence, with his head bowed.     He then spent several minutes sitting on a bench in private prayer before meeting with Holocaust survivors. During his visit Francis also prayed in the prison cell once occupied by the Polish saint Massimiliano Kolbe, who volunteered to take the place of a father selected for death by the Nazis. Before departing from the camp he left a message asking for God's forgiveness for the cruelty perpetrated there.     "Lord, have pity on your people! Lord, forgive such cruelty!" Francis wrote in Spanish according to a Tweet from the memorial museum at Auschwitz. Later in the day the pope is due to visit the paediatric hospital of Prokocim, before leading a Via Crucis with the young partic
Post a Comment
Read more

July 30, 2016
Scientists find new powerful antibiotic in human nose Source: Xinhua  2016-07-29 16:14:30 BERLIN, July 28 (Xinhua) -- Scientists searching for new antibiotics to cure hard-to-treat infections have found an effective bacteria in the human nose. According to a report published in the scientific journal Nature on Wednesday, a group of German researchers have discovered a bacteria called Staphylococcus lugdunensis. It can produce a chemical called hugdunin, which is bactericidal against major pathogens. The most important characteristic of the chemical is that it wouldn't develop a resistance in the bugs that it kills with repeated use, the researchers from the University of Tubingen in  Germany  pointed out. Killing so-called "superbugs," which are strong pathogens with a resistance to most antibiotics currently in use, is increasingly difficult as the more antibiotics we use, the more resistance those targeted pathogens will develop, the scientists warned. Superbugs cause a
Post a Comment
Read more

New approaches offer hope for controlling ovarian cancer Source: Xinhua    2016-07-30 04:38:49       LONDON, July 29 (Xinhua) -- Oxford university announced Friday that its researchers had found a way to detect ovarian cancer early and identify an enzyme related to the deadliness of ovarian cancer. Ovarian cancer can be difficult to diagnose because it grows virtually unseen into the abdominal cavity. If detected early enough, ovarian cancer responds well to chemotherapy. However, once it spreads it becomes resistant to chemotherapy. The results of the two new studies, published in two journals, provide new research routes for scientists trying to detect and beat the disease. In the first paper, in the online journal EBioMedicine, the Oxford team show that levels of a protein called SOX2 are much higher in the fallopian tubes of people with ovarian cancer and also in some people who are at high risk of developing ovarian cancer such as those with inherited mutations in BRCA1 and BRCA2
Post a Comment
Read more

The market just made a sell top three days ago and stochastics and relative strength are falling, a bad omen in addition of the polls showing Trump ahead by as much as 5 points in some states. Will the market shiver finally and break 18283 on high volume? Critical support level now at 17026. Due to the extreme valuations and technical crosscurrents, we are recommending caution until the air is clear as to how Trumps and Hillary nominations will influence the National polls. $DJI nearly year of declining tops in force since last December, stochastics weakening, support at 17678,16332,15200. On the medium range charts the markets are making new lower lows while tops are disguising the underlining downtrend, Yellen still printing money to support Hillary, but for how long is not clear. USD/CHF fell again to 0.9784 , indicating Yellen's suppressing rates a bit by shorting gold and printing dollars at the same time. 5 out 9 USD/CHF stochastics up, resistance 1.3843, gold broke resistanc
Post a Comment
Read more

The market has gone nowhere even after the coronation of Hillary and  now Obama has spoken, it is interesting to see if polls will plus Hillary and markets will follow. Unfortunately the market just made a sell top two days ago and stochastics and relative strength are falling, a bad omen in addition of the polls showing Trump ahead by as much as 5 points in some states. Will the market shiver finally and break 18283 on high volume? Rumors of another coup in Turkey did not help. Stand by. Critical support level now at 17026. Due to the extreme valuations and technical crosscurrents, we are recommending caution until the air is clear as to how Trumps and Hillary nominations will influence the National polls. $DJI nearly year of declining tops in force since last December, stochastics weakening, support at 17678,16332,15200. On the medium range charts the markets are making new lower lows while tops are disguising the underlining downtrend, Yellen still printing money to support Hillary,
Post a Comment
Read more
More posts